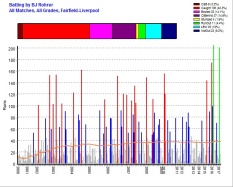 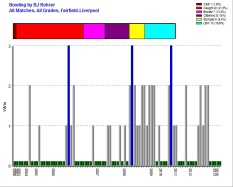 Ben Rohrer by the numbers:

With thanks to Andy Turner
Former ACT player, captain, board member, selector umpire and scorer passed away on the 18th June aged 83.

He played for Turner in 1957/58, playing just four matches, scoring 19 runs and taking 6 wickets. Overall, he played 222 1st Grade matches which is still 10th on the all time list of players. He appeared in Grand Finals on 7 occasions, being on the winning side on 3 occasions. He scored 4114 runs at an average of 18.04, with one century and 17 half centuries. His tally of 566 1st Grade wickets is the fourth highest in ACT 1st Grade history. He had a best bowling of 8-49 and took 5 wickets in an innings on 28 occasions and on a single occasion took ten wickets in a match. He is one of only two players (the other being Lorne Lees) to do the double of scoring more than 4000 runs and taking 400 wickets in ACT 1st Grade cricket history. As well as a long playing career, he also served as President of the Ainslie club from 1963 to 1969 as well as the City District Cricket Club.

Kevin first qualified as an umpire in 1973 and stood as a 1st Grade and Representative umpire from 1978/79 until 1996/97. He umpired 186 matches in 1st Grade which is currently the 5th highest overall and made appearances 27 times in Semi Final and Finals matches. As a representative umpire, he stood in 40 matches. Some of the highlights of his umpiring career include:

He was President of the ACT Umpires Association from 1982 until 1989, at the end of which Life Membership of this Association was added to his trophy cabinet.  His memory is revived on an annual basis: the ACT Umpires & Scorers Council’s ‘umpire of the year’ award has been known as the McCarty Medal for 20 years or more.

After his umpiring career was over, Kevin also acted as a representative scorer, mainly between 1999/00 and 2004/05, in an era when scorers were hard to come by in the ACT.

Long before he retired from playing he devoted a great deal of his life to the administration of cricket in the ACT. He was a member of the Grade Cricket Committee during 1968 to 1970 and again in 1978-79; he served intermittently on the ACT Selection Committee between 1966 and 1984; he was ACTCA Treasurer from 1967 until 1970, and served on the Executive Committee from 1967 until 1975.  If that wasn’t sufficient service, he topped it up with being ACTCA President for 5 years after his initial election in August 1970.  He was made a Life Member of the ACTCA in 1976, and the ‘Manuka Cottage’ included a ‘Kev McCarty Room’ when it became the ACTCA’s administrative HQ in 1992.